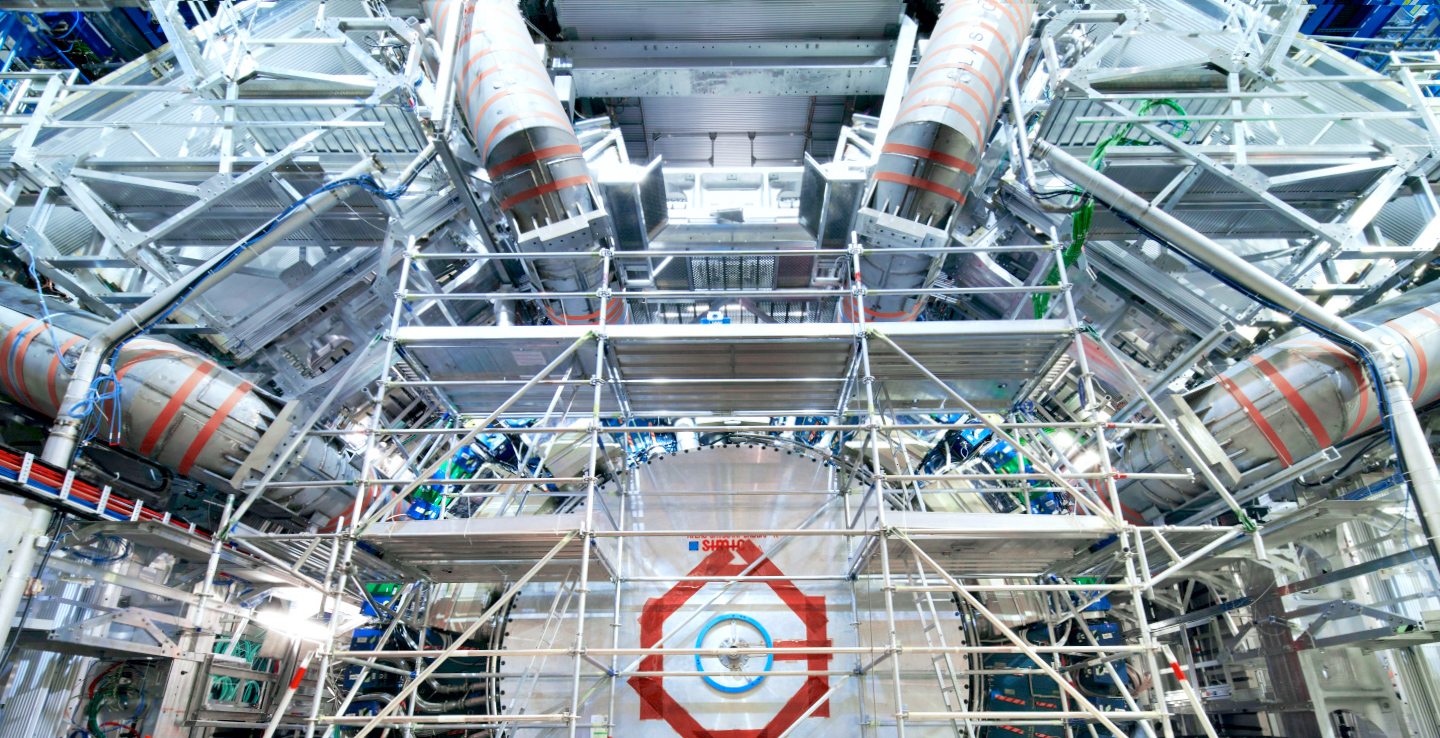 2020 has ended – at long last. Despite the huge challenges of the COVID-19 pandemic, last year saw excellent successes for the ATLAS Collaboration, including first-of-a-kind physics results and great headway made on detector upgrades. This progress is testament to the engagement and dedication of ATLAS members in the face of unprecedented conditions.

Like the rest of the world, no part of ATLAS has gone unaffected by the global pandemic. Members of the ATLAS Collaboration have had to adapt to a “new normal”. For many, this has meant months of working from home – juggling family obligations alongside their academic work – while others returned to the workplace for critical detector and infrastructure work, implementing new hygiene and safety protocols to minimise the spread of the virus.

"It was a difficult year, as the COVID-19 pandemic affected the work conditions of many members of the collaboration," says Stéphane Willocq, ATLAS Physics Coordinator "Despite these difficulties, we were able to make public a broad wealth of new results."

The ATLAS Collaboration passed a major analysis milestone in 2020: the release of 100 results using the full LHC Run-2 dataset, collected between 2015 and 2018. "We decided early on to focus on releasing results that analyse the full Run-2 dataset, which allowed us to reach this milestone quite early," says Guillaume Unal, ATLAS deputy Physics Coordinator. "This required a lot of collaborative efforts spanning across computing, software and performance groups to analysis teams, including also the production of crucial simulated data samples."

The results demonstrate the extraordinary scientific reach and diversity of the LHC and ATLAS. Explore some of the physics highlights in the timeline below, from the observation of photon collisions producing weak-force particles to the first signs of the Higgs boson interacting with matter particles of the second generation.

One of the areas most impacted by the pandemic was the upgrade work carried out during Long Shutdown 2 (LS2) of the LHC. "Working restrictions at CERN and the worldwide ATLAS institutes, as well as manufacturing and transport delays, placed unexpected burdens on our teams,” says Ludovico Pontecorvo, ATLAS Technical Coordinator. “In spite of these obstacles, and thanks to the commitment of everyone involved, work continued at an impressive pace, with several important milestones reached." Many Phase-I upgrades have been installed and commissioned, in anticipation for Run 3 of the LHC beginning in 2022, and several Phase-II projects have transitioned to pre-production mode, in preparation of the High-Luminosity LHC (HL-LHC) scheduled for 2027.

Key among these has been the construction of ATLAS’ now-iconic New Small Wheels of muon detectors. Work has proceeded apace, with the production of the wheel’s novel small-strip Thin Gap Chambers (sTGC) and Micromegas continuing at ATLAS institutes. Several of these chambers have already been installed onto the wheels at CERN, with testing and commissioning ongoing. Thanks to this excellent progress, the installation of both wheels during LS2 remains possible.

Five of the eight new BIS78 chambers – featuring small Monitored Drift Tube (sMDT) modules and a new generation of Resistive Plate Chambers (RPCs) – have been installed inside the experiment. These new detectors will improve the overall muon trigger coverage of ATLAS.

Elsewhere in the experiment, maintenance work has continued in preparation for the next operation of the LHC. The spring will see the installation of new electronics boards in the Pixel detector and new power supplies in the SemiConductor Tracker (SCT) sub-detector. Teams also made significant progress on a critical Phase-I improvement of the ATLAS trigger. This required the installation of new electronics in the Liquid Argon sub-detector, as well as upgrading the level-1 trigger processors, and installing new electronic cards for the Trigger and Data Acquisition (TDAQ) system. These complex upgrades are now approaching completion.

ATLAS teams throughout the world have progressed on the preparation of the Phase-II upgrades, which have transitioned in 2020 from the final design to the construction phase. This monumental project touches all ATLAS systems, including the complete replacement of the ATLAS inner tracking detector by a high-granular all-silicon device, to cope with the extreme conditions of the HL-LHC.

2020 also saw the release of new reconstruction software for the collaboration, which will be standard bearer for Run-3 data processing and analysis. "Delivering this software was the result of significant efforts from people working on software and event reconstruction," says Alessandro Di Girolamo, ATLAS Computing and Software Coordinator. "There is still a lot of work to do to finalise the validation, to optimise the performance of the reconstruction of the physics objects and to perform the data-driven calibrations and corrections. Preparations for Run 3 will also become an important part of 2021, with the launch of simulated data production in the autumn."

There is also great anticipation for the physics results yet to come. “We will continue to study the large Run-2 dataset to search for physics beyond the Standard Model and improve our measurements of a wide variety of processes, including rare processes,” adds Unal. “Our aim is to combine many of these results to further refine what we have already learned with this dataset.”

It is said that one's true nature is revealed at the times of greatest adversity. In that case, the spirit of the ATLAS members is quite telling. We look forward to what they will accomplish in 2021!