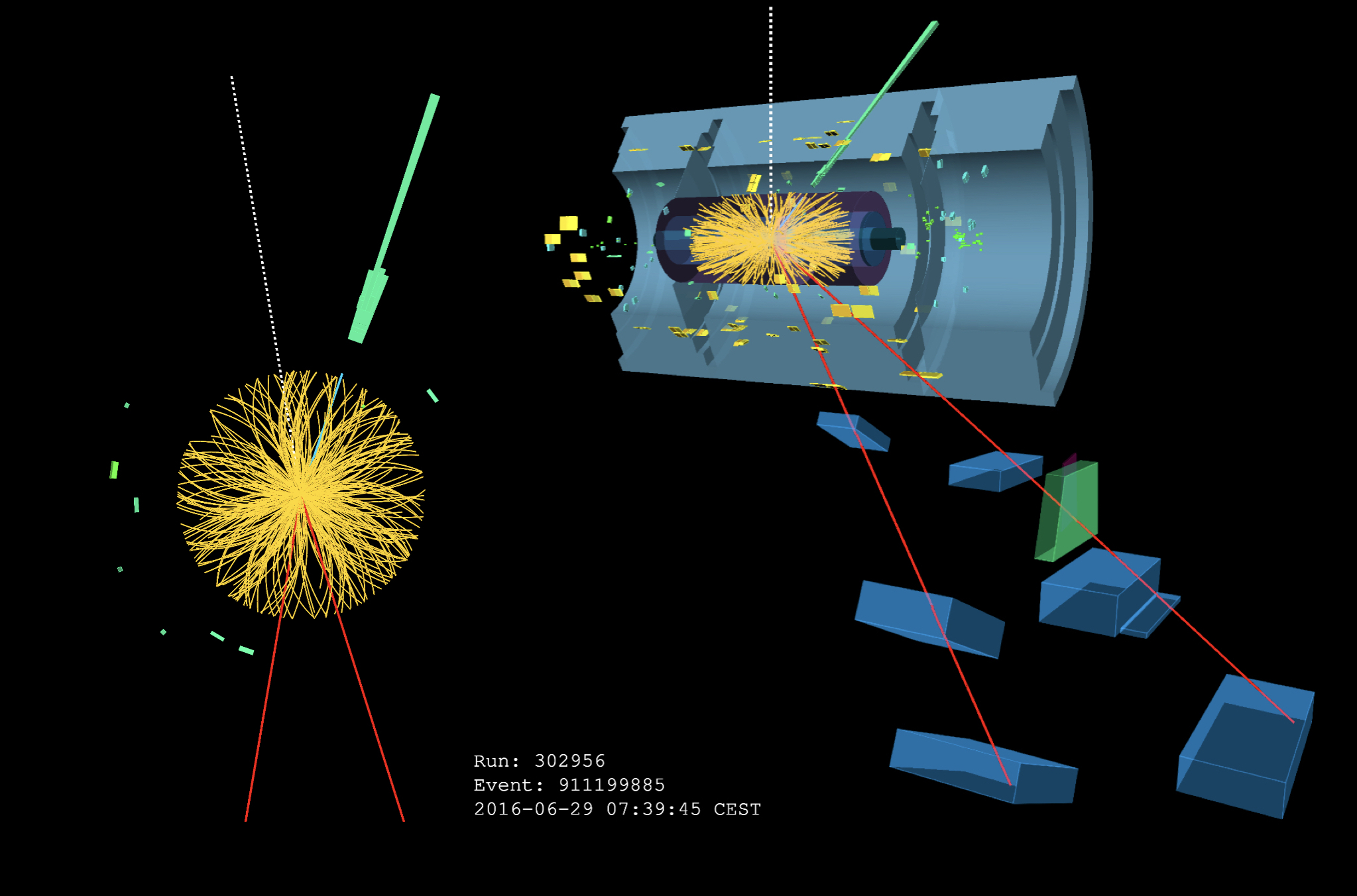 In the Standard Model, the Brout-Englert-Higgs mechanism provides mass to elementary particles. While physicists are carrying out direct studies of the Higgs boson to test this mechanism, probes of other particles with mass can also provide insight. For instance, the W and Z bosons (carriers of the Weak force) get their mass from the Higgs mechanism. This impacts their polarisation – that is, the degree by which their spin is aligned to a given direction. The W and Z bosons have a spin of 1 and can be longitudinally polarised as a direct consequence of their being massive – in other words, their spin is oriented perpendicular to their direction of motion.

The simultaneous production of two W or Z bosons (diboson production) allows physicists to study fundamental interactions between bosons. These rare processes have yet to be fully tested against Standard Model predictions and studying their polarisation is a way to potentially unveil new physics effects. While the polarisation of W and Z bosons separately has been studied since the Large Electron-Positron (LEP) collider era, two vector bosons produced simultaneously with a longitudinal polarisation have never been observed. With the wealth of data collected during Run 2 of the LHC, ATLAS researchers are now able to study the joint-polarisation states of diboson events. This is the first step toward studying the rarer scattering of polarised vector bosons.

For the very first time, the ATLAS Collaboration has observed events with both a W and Z boson simultaneously polarised longitudinally.

To achieve this result, physicists first identified events containing both a W boson and a Z boson. They focused on events where the bosons decay into leptons, as these leave the clearest signature in the detector: the Z boson decays to an electron-positron or muon-antimuon pair; the W boson decays to a charged lepton and a neutrino, where the electron or muon is recorded along with missing transverse momentum. Researchers then reconstructed the kinematic parameters of the leptons and their parent bosons. The polarisation of the bosons manifests itself in the measured angular variables, as described in Figure 1. Such variables have very distinct distributions in WZ events for different polarisation states. For example, to distinguish between polarisation states of one boson, the angle of its decay lepton can be used. If the leptons decay very forward or backward with respect to the direction of flight of the boson, the boson is more likely to be transversely polarised. Similarly, in the rest-frame of both bosons, the angle of their back-to-back momenta with respect to the beam axis is sensitive to the joint-polarisation of both.

However, not all joint-polarisation states are equally probable. The most interesting events, with both bosons exhibiting a longitudinal polarisation, are well hidden – they represent only ~7% of all WZ events, amounting to just 1200 events out of the 17,100 WZ events studied by ATLAS. Moreover, the presence of a neutrino in the W-boson decay prevents the complete kinematic reconstruction of the events, blurring up the distinctive shapes of angular observables.

To overcome these two challenges, researchers developed dedicated machine-learning algorithms to extract the four joint-polarisation fractions with a relative uncertainty of ~20%, at most. As seen in Figure 2, the theory predictions always lie within the 95.5% confidence level region of the measurement, meaning that there is no significant tension with the theory. Researchers also found that the product of the two single-boson longitudinal polarisation fractions is about 50% below the actual longitudinal-longitudinal joint-polarisation fraction. This is a direct measure of the role played by correlations between the two bosons and demonstrates that they are not independent.

For now, the Standard Model holds strong. But the feasibility of joint-polarisation measurements provides new opportunities to look for new physics phenomena, targeting more specific (and rarer) processes. Building on the novel techniques developed here, physicists can now envisage the even more challenging joint-polarisation measurement of the scattering of two longitudinally polarised bosons.

About the event display: Event display of a WZ → eν μμ candidate. The Z boson candidate decays into two muons (red lines). The W boson candidate decays into an electron, identified from its energy deposits in the cells of the electromagnetic calorimeter (green bars), and a neutrino (unobserved). The missing transverse momentum of the event has a value of 204 GeV, and is indicated by the dotted white line. On the left, a transverse projection shows the inner area of the detector, where also the tracks of charged particles (yellow) are visualised. On the right, a view of the detector showing, starting from the interaction point at the centre, the inner detector, the electromagnetic and hadronic calorimeters, and the muon chambers (blue and green boxes) associated with the two muon tracks. The two bosons in the event are measured to be longitudinally polarised, with a probability of more than 98%, as estimated using a machine learning algorithm exploiting the global kinematic properties of the event. (Image: ATLAS Collaboration/CERN)