Where is all the new physics? In the decade since the Higgs boson’s discovery, there have been no hints of new particles in LHC data. Could they be sneaking past the standard searches? ATLAS researchers are developing innovative ways to search for particles, improving their search programme to ensure they have the best chance of discovering new physics in Run 3 of the LHC.

At the recent Moriond conferences, the ATLAS Collaboration presented several new results related to searches for weakly-interacting supersymmetry. Supersymmetry (SUSY) is a promising theory that gives each elementary particle a “superpartner”, thus solving several problems in the current Standard Model and even providing a possible candidate for dark matter. ATLAS’ new searches target charginos and neutralinos – the heavy superpartners of the force-carrying particles in the Standard Model – and sleptons – the superpartners of Standard Model leptons. If produced at the LHC these particles would each decay into Standard Model particles and the lightest neutralino, which is taken to be the dark matter candidate.

Searching for charginos and sleptons in unexplored regions

ATLAS’ newest search for charginos and sleptons studies a mass region previously unexplored due to challenging background conditions. Researchers designed dedicated searches for each SUSY particle, looking at their decays into two leptons (electrons or muons) and missing energy (attributed to a neutralino). They focused on signals where the mass difference between the produced SUSY particles and the neutralino would make them very similar to the Standard Model production of two W bosons (WW production).

This search used new methods to try to extract these challenging signals from the background. Researchers used machine learning techniques to calculate, on an event-by-event basis, the probability of a given event being signal. To avoid reliance on Monte Carlo simulations, they derived new "data-driven" background estimates based on data samples not used in the search.

No significant excesses are seen above the Standard Model background. Researchers set exclusion limits on the possible masses of the SUSY particles; the results for sleptons are shown in Figure 1. The analysis excludes slepton masses up to 180 GeV, surpassing limits at low mass set by experiments at the Large Electron-Positron (LEP) collider that have stood for nearly twenty years, and ruling out some of the models that could explain recent anomalies associated with the magnetic moment of the muon (from the Muon g-2 experiment).

Bridging the gap between searches and measurements

WW production is a significant background process in many SUSY searches. Using the results a previous search for charginos and sleptons, ATLAS researchers have been able to improve their understanding of WW production, producing particle-level measurements of the production in electron-muon events with event topologies inspired by the search. These allow physicists to correct for detector effects and reconstruction/identification inefficiencies, enabling comparisons with different theoretical predictions. These precision measurements can also help improve future searches by reducing theoretical uncertainties on background processes, and can be used to calculate additional constraints on new physics processes.

This study looks at more “extreme” topologies than are typically considered in Standard Model measurements, providing an exciting new test of the Standard Model. Figure 2 shows measurements of the angular separation of a pair of leptons (produced by the W bosons) in the plane transverse to the colliding beams. This is compared to two simulations; the under-prediction at lower values indicates a slight mis-modelling that researchers hope to understand and improve for future searches.

Searches for supersymmetry require a multi-pronged approach, with researchers improving their analysis techniques as well as their understanding of challenging Standard Model backgrounds.

A new leap in sensitivity

ATLAS physicists have also released a new search for chargino-neutralino pairs, following up on some previous small excesses seen in early analyses of Run 2 data. They studied events where the chargino and neutralino decay via W and Z bosons respectively, with the W boson decaying to hadronic jets and the Z boson to leptons. When the mass difference between the produced neutralino and the lightest possible neutralino goes below the Z boson mass, it is harder to select the signal events and the backgrounds are more challenging to model. This is the first ATLAS result in this decay channel to target this difficult region. No significant deviations from the Standard Model predictions were observed and exclusion limits were calculated on the SUSY masses.

Figure 3 shows the calculated exclusion limits, where the dark and light grey regions correspond to the previous ATLAS limits from 8 TeV and early 13 TeV data respectively. This illustrates the significant improvements in ATLAS’ search sensitivity in recent years, with constraints now extending towards 1 TeV for a massless neutralino and to lower mass splittings for low-mass charginos and neutralinos.

With the LHC set to begin its third data-taking run, ATLAS physicists are looking forward to building on these exciting results and searching for even rarer signal processes. In particular, they will target low-mass SUSY models that are well-motivated both theoretically and by recent anomalies. Going forward, searches for SUSY will require the multi-pronged approach illustrated in this briefing – with researchers improving their analysis techniques as well as their understanding of challenging Standard Model backgrounds.

About the event display: Collision event studied in ATLAS' search for charginos and sleptons. It shows two electrons (blue), missing transverse energy (dashed white line), and no jets. Energy deposits in the liquid argon calorimeter are shown in green, and those for the hadronic calorimeter are in yellow. 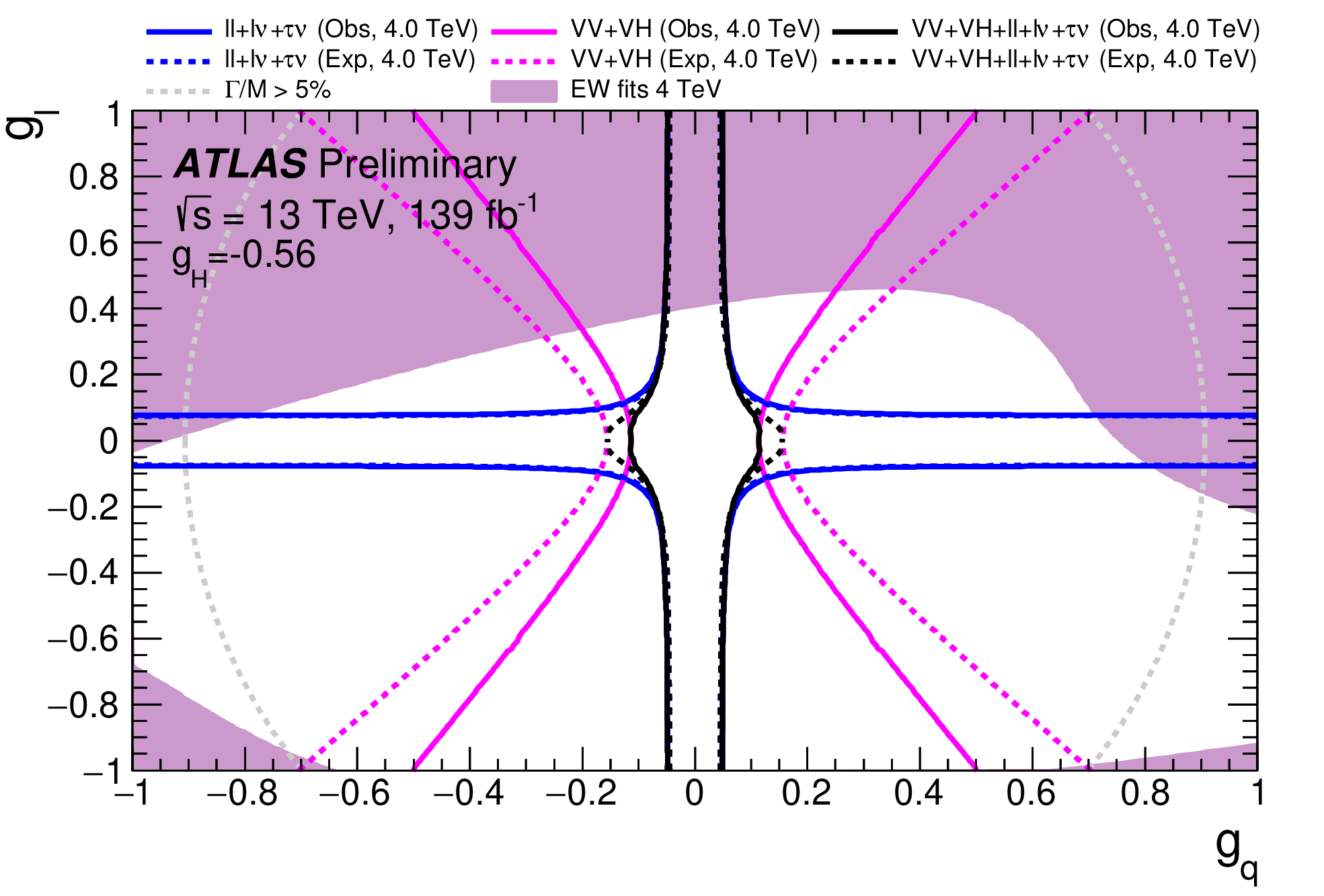