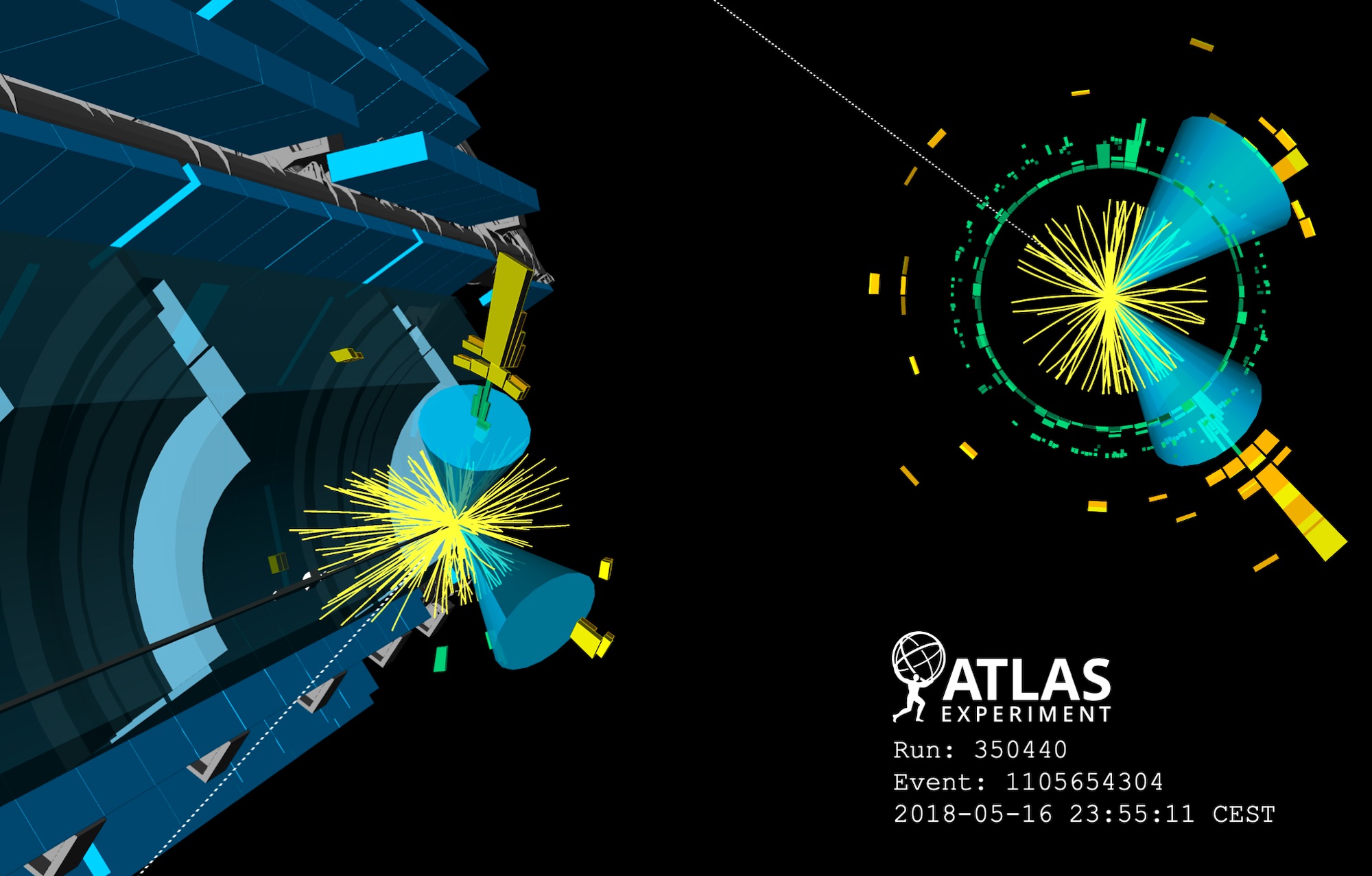 While many interactions described by the Standard Model are the same across the generations, the Higgs boson interacts differently with particles in different generations. In particular, the Higgs boson is predicted to interact with the matter particles with a strength that is proportional to their mass, i.e. Higgs-boson interactions with second-generation quarks should be weaker than those with third-generation quarks. By measuring these interaction strengths in the ATLAS detector, physicists can test the Standard Model and gain new insight into the nature of particle generations.

In a new result, physicists from the ATLAS Collaboration have combined two measurements of the interaction strength of the Higgs boson with two different pairs of quarks: a search for the Higgs-boson decay into a pair of charm quarks (H→cc) and a measurement of the Higgs-boson decay into a pair of beauty quarks (H→bb). The combination of these two measurements allows physicists to test a hypothesis that the Higgs boson interacts with charm quarks (which are second-generation quarks) in the same way it interacts with beauty quarks (third-generation quarks).

The H→cc and H→bb decays lead to very similar signatures in the ATLAS detector, as shown in the event display. In both cases, the quarks from the Higgs-boson decay hadronise, which causes collimated sprays of particles called “jets”. Researchers are able to distinguish the b-jets of H→bb from the c-jets of H→cc by analysing the constituents of the jets, looking for the traces of b- or c-hadrons. With the help of machine-learning algorithms, the jets can be classified as originating from a beauty quark, a charm quark or something else.

An innovative new analysis from the ATLAS Collaboration confirms that the Higgs-boson interaction strength is different for charm quarks and beauty quarks.

Since b-jets and c-jets are sometimes misidentified, a fraction of the H→bb events passes the selection criteria of the H→cc analysis and vice versa. Thus, a combined analysis of both processes is key to an optimal measurement. ATLAS researchers designed the individual analyses with particular care to ensure that no collision events were double counted. This orthogonality between the analyses enabled them to be studied together for the first time.

With this novel combination, ATLAS physicists are able to exclude the hypothesis that the Higgs boson interaction with charm quarks is stronger or equal than that with beauty quarks. The hypothesis, illustrated in Figure 1 by green lines, is excluded at the 95% confidence level by the measurement, shown by the yellow curve. This measurement establishes that the Higgs-boson coupling is smaller for charm quarks than it is for beauty quarks – the Higgs boson interacts differently with quarks of the second and third generation.

In preparation for the third run of the LHC, ATLAS physicists are making new improvements to their analysis techniques, including the aforementioned jet classification algorithms. Together with additional collision data, this paves the way towards more detailed measurements of Higgs-boson interactions with second-generation quarks.