If you’re a young physicist working in high energy physics, you realize very soon in your career that “going for Moriond” and “going to Moriond” are two different things, and that neither of the two means that you’re actually going here:

“Les rencontres de Moriond” is one of the main Winter conferences for our field. Starting from its original location in Moriond, it has been held around the French and Italian Alps since 1966. In the 60s and 70s, there was a clear distinction between two branches of the same conference, as “electroweak” and “QCD” physics were still done in different labs and accelerators: in those years the former had to do for example with the discovery of the W and Z bosons and their interactions, while the latter saw the developments of a model to describe the “quarks” that compose protons and neutrons, and the discovery of these constituents themselves. Nowadays, both kinds of physics are studied at the LHC and in other experiments around the world, so the results presented in the two conferences are not necessarily divided by topic anymore.

This year I was lucky enough to be contributing some results that were “going for Moriond”, which means they’d be approved by the Collaboration to be presented at this conference for the first time, but I would also be “going to Moriond” in person. This year’s “Moriond Electroweak” was held in the Italian mountain resort of La Thuile, and had a special significance. In the session that celebrated the 50 years of the conference, the founder Jean Trân Thanh Vân reminded the audience of the two pillars of this conference:

The first point was made when theorists and experimentalists alike were asked to take part in a slalom competition. The results were not categorized by subject of study, but certainly the cheering came from and towards both parties.

The latter took place almost every evening, in the dedicated “young scientists session”. Here, students and young post-docs can apply to give a short talk and answer questions on their research topic in front of an international audience of theorists and experimentalists.

The questions and answers can be then carried on to the (abundant) dinner. As an Italian, I do appreciate the long evenings dedicated to a mixture of excellent food combined with physics discussions (and where the two can be identified with each other, as in this snapshot from a talk by Francesco Riva).

Back to the physics: the results I contributed to were shown in the afternoon session, before the 50th anniversary talks. They’re in the top corner of one of the slides from the summary of the ATLAS and CMS new physics searches.

That’s only the tip of the iceberg of a search that looks for new phenomena that would manifest as an excess of collimated jets of particles in the central region of the detector, and it shows that there is no new physics to be found here, nor in any of the other searches shown in the conference so far. (What we didn’t know at that time was that there would be something not consistent with expectations in the LHCb results shown just one day after, as explained in this article).

Given that so far we have not found much beyond what we consider Standard (as in belonging to the predictions made by the Standard Model of Particle Physics), the conference had a special focus on searches that look for the unexpected in unexpected places. “Stealthy” is how the physics beyond the Standard Model that is particularly hard to find is characterized, and as experimentalists we want to pay particular attention to the “blind spots” where we haven’t yet looked for the upcoming LHC runs. This was highlighted in the morning talks, describing searches for Supersymmetry in blind spots and searches for particles that leave no immediate signature after the collision because of their long lifetime. There were also other ideas of how to test the Standard Model with very high precision, as highlighted in another food-related slide by Francesco Riva.

No one in the audience forgot, however, that the new LHC run will bring more energy and more data. Both will allow us to investigate new, rare processes that were not accessible in the first run. Discoveries might be just around the corner!

Overall, the “Rencontres de Moriond” conferences have the effect of leaving everyone enthusiastic for the discussion and eager for more results: in particular, next year’s edition may see some of the first results of the upcoming LHC run. And of course, the results will be best discussed on skis and over dinner. 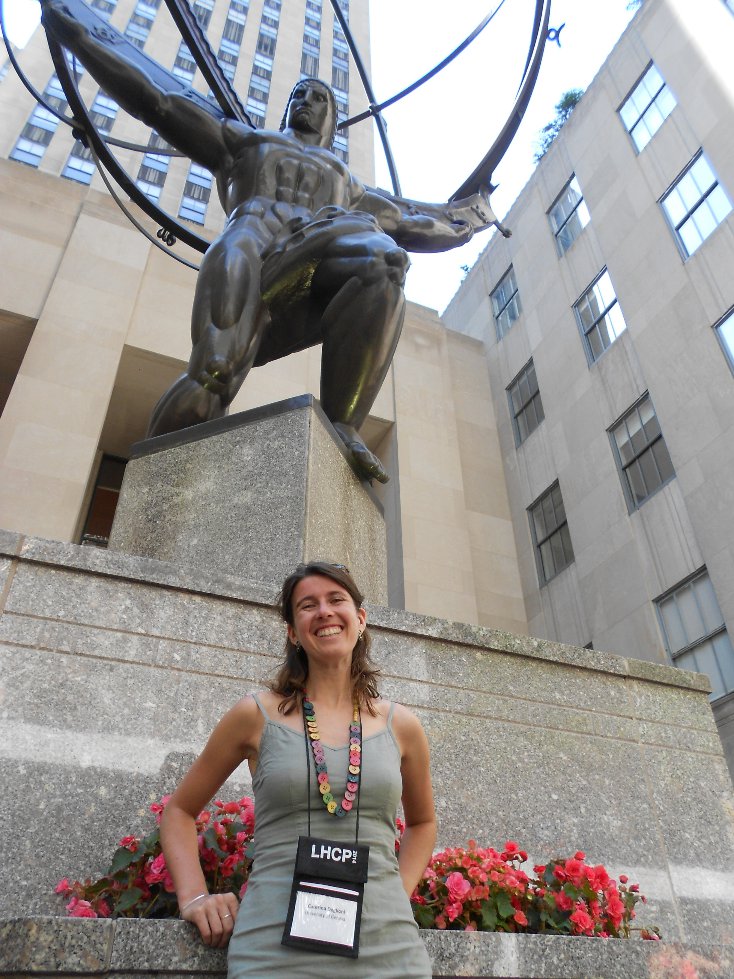 Caterina Doglioni is a post-doctoral researcher in the ATLAS group of the University of Geneva. She got her taste for calorimeters with the Rome Sapienza group in the commissioning of the ECAL at the CMS experiment during her Master's thesis. She continued her PhD work with the University of Oxford and moved to hadronic calorimeters: she worked on calibrating and measuring hadronic jets with the first ATLAS data. She is still using jets to search for new physics phenomena, while thinking about calorimeters at a new future hadron collider.