The Lepton Photon 2011 conference began on Monday in Mumbai, India. Over 400 physicists from all over the world (including me!) gathered to hear the latest results. One result in particular -- news on the search for the Higgs boson -- was foremost in people's minds, and rather than prolong the suspense further, the talks on the Higgs were scheduled right after the welcoming speeches.

For some context on why we look for the Higgs, you can see CERN's explanation for the public. It's often called the "missing piece" of our knowledge of particle physics, but rather than call it THE missing piece, I would say it's A missing piece. Even if it is discovered soon, there are still many unanswered questions in particle physics. Among other things, the current theory has nothing to say about gravity (which we know exists!). It doesn't explain why we see many copies of the same particles, or what the masses of those particles should be. It doesn't explain the matter-antimatter asymmetry in the universe. These are some of the most interesting questions to me, so even if we find the Higgs I will still have work to do. There was some added anticipation for the talks on Monday because the most recent results a few weeks ago at the EPS conference in France looked tantalizing. For more on that story, see Jon Butterworth's posts at the Guardian.

There was no clear evidence at EPS that the Higgs boson was being observed, but there were hints. Each time the proton beams cross, we analyse the collision. After reconstructing the outgoing particles, we have some hypothesis about what the collision resulted from. For any given collision, we can't say for sure whether the particles came from the decay of a Higgs boson or anything else. We can only tally up collisions in columns of "looks interesting" and "looks interesting in a different way" and "doesn't look interesting". You can see one example of an interesting event below, in a display from ATLAS. This is a candidate event for a Higgs boson decay, consistent with the hypothesis that a Higgs boson was produced, and it decayed into two Z bosons, and one Z boson decayed into two electrons and the other Z into two muons. This same decay can also be produced by a less interesting physics process, so we can only predict how many less-interesting collisions we should see and see if we observe that number, or more or less. There were more of the candidates than expected for one of the possible decays, so we began to wonder if they were coming from the Higgs.

The first talk of the session at Lepton Photon was given by Abdelhak Djouadi, a theorist from LPT Orsay in France and CERN. More than once he and the welcoming speakers mentioned that we were all interested in the progress of the Higgs search, and that the first clear evidence for the Higgs may be presented today. The next three talks were given by experimentalists, Aleandro Nisati (Rome) for ATLAS, Vivek Sharma (UC San Diego) for CMS, and Marco Verzocchi (Fermilab) for CDF and D0, each presenting the results from the major experiments which threw a bit of cold water on the excitement of the previous speakers.

All three experimental talks presented limits on the Higgs boson, and no evidence for its production. In other words, the decays observed by the experiments are consistent with the hypothesis that they were produced by less-interesting non-Higgs processes. You can see the results from ATLAS and CMS below, as well as the combined results from the CDF and D0 collaborations at Fermilab.

For more details on how to read these plots, please see Aidan Randle-Conde's post about how to interpret Higgs limit plots from EPS and if you want to learn even more, I recommend Ben Kilminster's lecture on looking for the Higgs given last February in Aspen, Colorado. More official details on ATLAS' search can be found as well.

A tremendous amount of work goes into making each one of those limit plots.For example, in the ATLAS plot, seven different analyses are combined, each one done by a group of dozens of people. You can see the limits from each of the seven ATLAS analyses below.People also have to spend time thinking about how best to combine all these results, as Kyle described in a previous post about the ATLAS Higgs combination.The ATLAS, CMS, CDF, and D0 limits on the Higgs represent the work of literally hundreds of people. All this work, for something that may not exist at all! (See: Higgs boson may be a mirage.) Proving the Higgs boson's existence or lack thereof will greatly advance our understanding of how the world works, and that makes it worth our time. We should have some answers in the coming months! 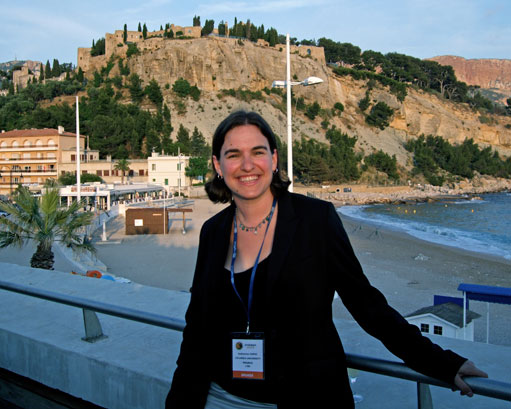 Katherine Copic has been working with the ATLAS Collaboration since 2007. She has been a postdoc with Columbia University for four years, and will being a new staff position at Lawrence Berkeley National Lab in September of 2011.