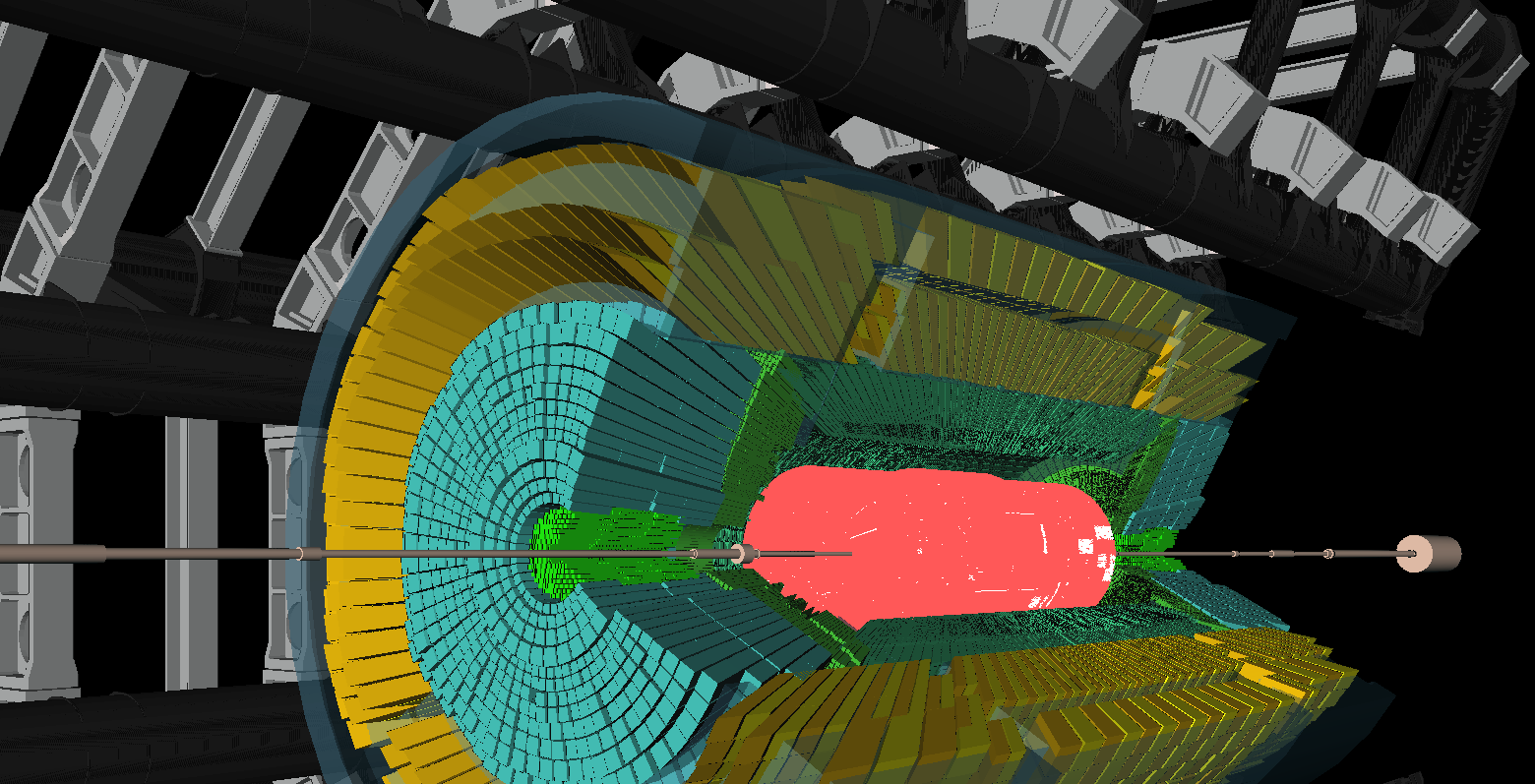 Countdown to physics: Beams splash in the ATLAS experiment

After over three years of upgrade and maintenance work, proton beams are back in the Large Hadron Collider! Friday 22 April 2022 marked the start of the LHC’s third operation period (Run 3), which will see a record number of collisions in the ATLAS detector.

But data-taking for physics analyses won’t be starting just yet – LHC operators first need to recommission the accelerator and safely ramp up the energy and intensity of the beams. The first collisions for physics are expected this summer, and will be at a record energy of 13.6 TeV. Until then, it is “beam splash” season in the ATLAS experiment.

Beam splashes are the first and simplest type of particle collisions created by the LHC. They arise as a single proton beam hits a collimator placed in the beamline just ahead of the ATLAS detector. Like a giant wave striking the shore, the beam sprays out a stream of particles (mostly muons and hadrons) into the experiment ahead. Splashes are used by the experiments to test their numerous sub-detectors and to synchronise them with the LHC clock.

Two beam splash events recorded by the ATLAS experiment on Thursday 28 April 2022. The display on the left shows the spray of particles entering ATLAS from the lefthand side of the image (the "C-Side" of the detector) and travelling to the right (the "A-Side"). The display on the right shows the spray entering ATLAS from the right/"A-Side" and travelling to the left/"C-Side". In both, the figure on the left shows an axial view of ATLAS and the figure on the right shows the energy deposits in the cells of the ATLAS calorimeter. The bottom figure shows a side view of the ATLAS. From the centre of the detector moving outwards, the image shows particle interactions in the TRT detector, electromagnetic and hadronic calorimeters, and muon detectors, respectively. The data visualised was recorded using a threshold-based data filter (“trigger”) based on energy deposits in the electromagnetic calorimeter on the “A-Side” (for the left event) and "C-Side" (right event) of ATLAS. (Image: ATLAS Collaboration/CERN)

Today, the LHC had a dedicated run to create beam splashes at both the ATLAS and CMS experiments. Though ATLAS saw its first “parasitic” beam splashes on Friday 22 April, today’s splashes allowed for more detailed commissioning procedures to take place.

Just like a wave, the beams splashing into ATLAS reach one side of the experiment before the other. As this small difference in timing is important to ATLAS’ calibration, today’s beams were splashed from both sides of the detector (“A” and “C”).

Wide and close-up views of a beam splash event recorded by the ATLAS experiment on Saturday 7 May 2022. In this event, the spray of particles enters ATLAS from the right hand side of the pictures (the "A-Side" of the detector) travelling to the left (the "C-Side"). From the centre of the detector moving outwards, the images show particle interactions in the TRT detector (red and white), the LAr (different hues of green) and Tile (yellow) calorimeters, MDT (blue), RPC (purple) and TGC (white) muon detectors, respectively. In the event on the left, the orange lines in the two right-hand inlets show the reconstructed muon segments. The data visualised was recorded using a threshold-based data filter (the “trigger”) based on energy deposits in the electromagnetic calorimeter on the “C-Side” of the detector. (Image: ATLAS Collaboration/CERN)

The event displays shown here paint a special picture of the ATLAS experiment. Unlike those used in physics analyses, these events “light up” every part of the experiment. By studying these displays, ATLAS physicists can immediately spot if their sub-detectors are working and confirm the validity of the data taking.

This is an important step in the data workflow, preparing ATLAS to record first-physics collisions this summer. The wait is almost over!

This article, originally published on 28 April 2022, was updated on 7 May 2022 to feature new event displays from beam splash tests carried out 7 May 2022.

About the event display in the banner: One of the first Run 3 beam splash events recorded by the ATLAS experiment on Friday 22 April 2022. In this event display, the spray of particles enters ATLAS from the left hand side of the picture (the "C-Side" of the detector) travelling to the right (the "A-Side"). From the centre of the detector moving outwards, the image shows particle interactions in the TRT detector (red and white), in the electromagnetic (different hues of green) and hadronic (yellow and orange) calorimeters, respectively. The data visualised was recorded using a threshold-based data filter (the “trigger”) based on energy deposits in the electromagnetic calorimeter on the “A-Side” of the detector. (Image: ATLAS Collaboration/CERN) 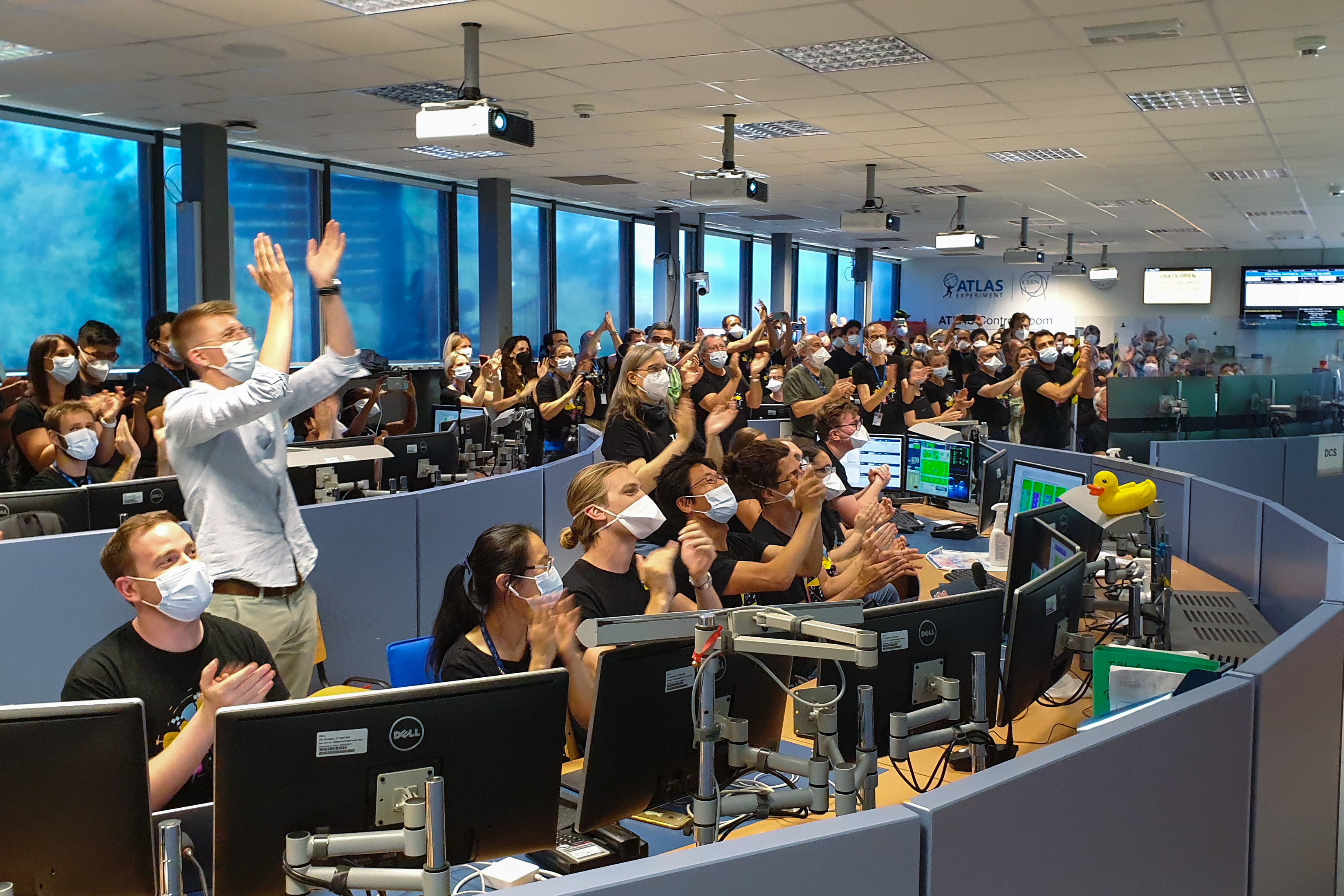 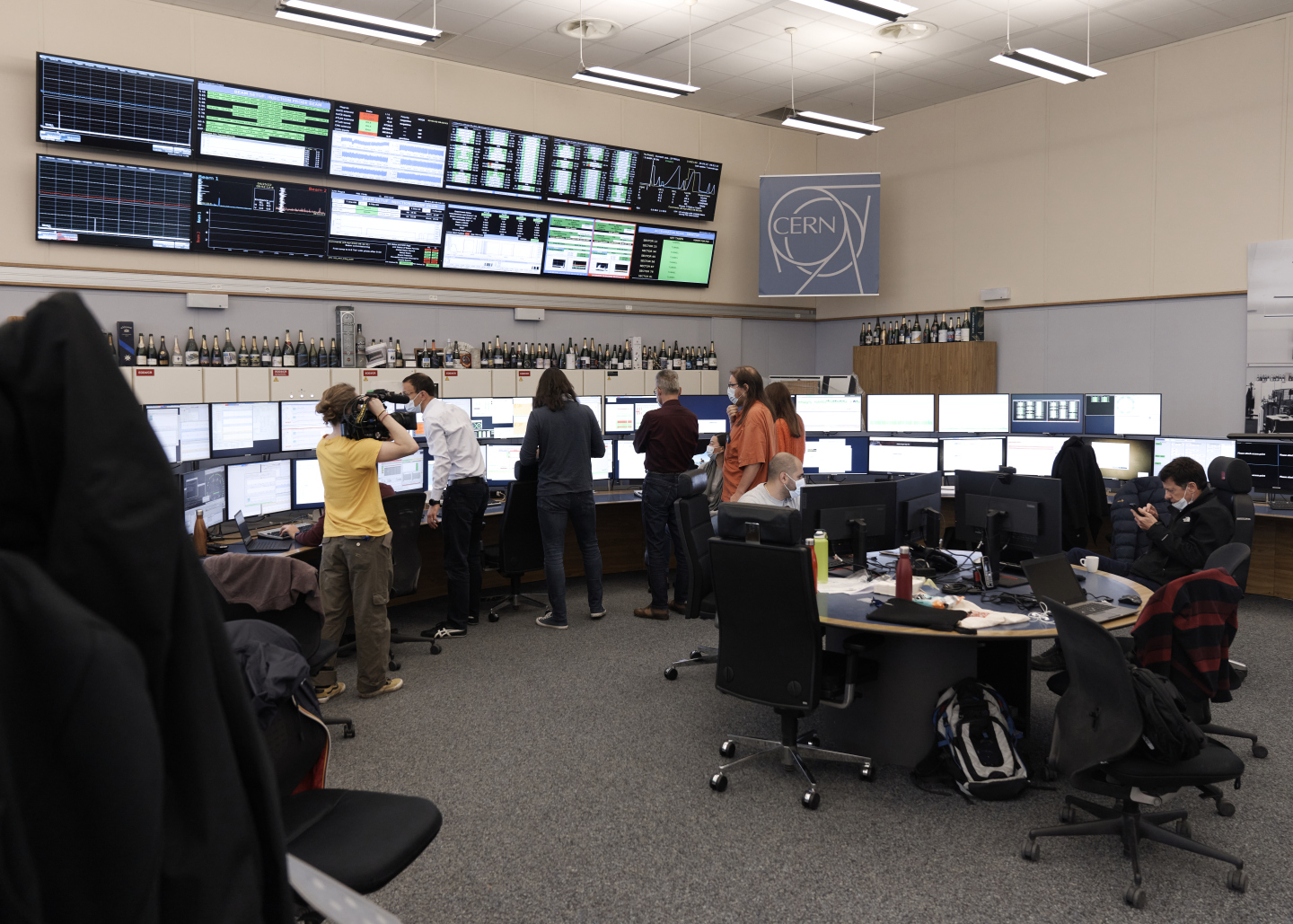